The interview fostered discussions surrounding Dr. Salomon’s unique journey into the medical field (including some of his trials and tribulations), the prosperity of his career, and his eye-opening experiences during COVID-19.

Born and raised in Port-au-Prince, Haiti, Dr. Salomon said his native land taught him to overcome adversity very early on in life. After attending a Jesuit preparatory high school in Haiti, he left for Boston University at the age of 17 where he was accepted into an accelerated medical program that combined college and medical school. Later, he served a total of three residencies — general surgery at the University of Connecticut, plastic surgery at Brown University, and craniofacial surgery at the University of Texas Southwestern Medical Center — before starting his practice in Miami. Breaking several boundaries in the medical field and throughout his career, Dr. Salomon remains a leading innovator in the sphere of plastic surgery.

Here are some of the questions and answers from the exclusive interview with Dr. Salomon: 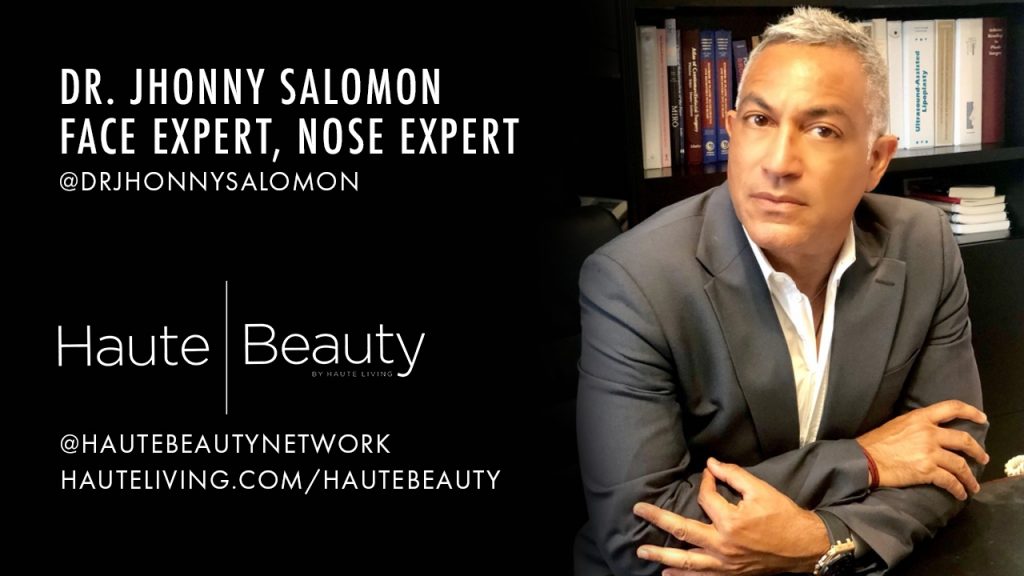 Seth Semilof: Did you always know you wanted to enter the medical field?

Dr. Jhonny Salomon: I love medicine and the world of beauty, and I always wanted to combine both. I went into medicine with the vision of becoming a plastic surgeon, where I could combine the beauty part with the medical part. I had a very clear vision of where I wanted to go.

SS: What made you come to Miami?

DJS: Plastic surgery was not what it is today. I think it was a field in its growth though now it’s really flourished. So I was considering California and New York and Miami to establish my practice because I wanted to settle in a big city. Miami was very appealing because I grew up in Haiti, so it’s close by, and the weather, culture, and influences were very similar. I also had a vision that Miami would be an amazing city in the future; it would become so much more facilitated than it was back then in 1999. So after considering all my options, I opted for Miami.

SS: How did you start your practice in terms of clients and location?

DJS: My first office was very close to my current one, which is in the heart of Miami. With plastic surgery, the community has to develop not only trust for you but has to like you as a human. If you have a good heart and are also an amazing doctor, then you really can become a success. When I started, I did little things: I worked at the emergency room, took care of lacerations, did breast reconstructions after cancer, and treated everyone incredibly. That way, the families would get to know me and return in the future if they needed more work. In 2003, the laser world became very popular. So I had the vision to develop a medical spa in addition to my regular plastic surgery practice. It was a big risk as a new surgeon, but I had the conviction and internal strength to take that challenge. I was very fortunate because the people liked me in the community and supported my medical spa. Meanwhile, my regular plastic surgery practice blossomed at the same time. You need to have a vision of the entire process from the personnel to the look and overall experience. It really becomes a hospitality industry when you add the medical spa component.

SS: How do you continue to be at the top of your field?

DJS: You need a lot of love and passion because people see when you’re very passionate about something, and they connect with you — I’m very open, I care for people, and I love the community. People need to love you as an individual and then your skills. I think that helps a lot when you have amazing skills and you’re on top of things and can deliver results. I’m an artist; I see the world with a lot of details, and I don’t give up until it’s perfect. Second, running the business is important — having a vision, making the right decisions, picking the best lasers in the market, and being the first to do so. It’s all necessary to stay relevant. Finally, you need to be a great psychologist. A lot of people come with deep insecurities, deep issues, and if you’re not connected with them or really trying to help them through that process, then I don’t think you’ll be a successful plastic surgeon.

SS: Where do you envision the future of plastic surgery going over the next 10 years?

DJS: The beauty world and plastic surgery realm are huge markets. There are so many people working on so many different angles that it’s hard to know which one will be the trendsetter or disrupter in the field. But I think stem cell [procedures] will play a major role in the future of plastic surgery. Every day, there are non-invasive treatments for muscle and skin tightening that are coming out; I’m hopeful that there’s going to be a disrupter in the tightening of the skin, as that will be a major advancement in plastic surgery.

SS: What are some tips that you’d give to somebody in medical school right now?

DJS: Believe in yourself even if nobody else believes in you. Take your risks calculated at the right time. Have a clear vision of your future and follow that vision. Don’t be afraid of the universe; embrace it because it will support you in your path. And do what you love, for sure.

Watch their conversation below: